December 06, 2021
We spend so much time living thousands of milea apart, it's very special when we get to spend time together. John came home the day before Thanskgiving and we've been enjoying time as a family - nearby and more extended.
For Thanksgiving, we went completely non-traditional.  We started out the day with our kids and their kids going to see the new Disney movie, Encanto.  Two thumbs up from me!  Music by Lin-Manuel Miranda was fantastic and the story was touching.
Then we took our son and his family to eat our Thanksgiving meal at IHOP!!  Yum!  I would so much rather have a delish breakfast than spend time cooking a turkey that I don’t even really like to eat. I did, however, make pies.  All of our favorites.  Apple, Key Lime, and Pumpkin - this time pumpkin swirled with chocolate! Here’s the Apple and Key Lime. Sorry no pics of the Pumpkin. 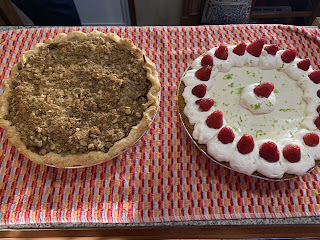 A bit of time at Grandma and Grandpa Lauritzen’s gave us the chance to visit with them and John’s two brothers and some of their kids.  His sister and family spent their Thanksgiving in the Bahamas with their kids and grandkids.  Good times!
Next day we gathered up food and took a meal to Stef and her crew.  Her partner, Jo, was thankfully able to come home after six grueling months in the hospital with many near-escapes from dying.  It has been a tough year for them and their sweet girls.  They picked breakfast food also, so we orders from Dee’s and drove out to Magna with the haul.  Great times.
Saturday was spent helping John’s folks with their storm door and lawn.
Then we got to start getting ready for a trip to see my brothers and sister-in-law.  We haven’t seen them in over two years and we have a LOT of earlier missed time to make up.  Dave and James are my brothers through my birth-mom and we only found each other a few years ago after a lifetime of being apart.
So at O’Dark Thirty we hopped in our rental car with our little poodle for his first road trip.  Oceanside or bust!
Well, at O’Dark Forty Five we hit our first bust!  Our rear driver side tire was going flat.  We got off the freeway about 15 miles south of home and put some air in it, hoping it was just low and went past the tolerance level for the alert because of the cold morning. Nope. Literally minutes back on the freeway we got the alert again and could just watch it going lower and lower on the dash warning. So we pulled off again and called Enterprise road assistance.  Very nice people!
Unfortunately, nothing at all was open to us at that time in the morning.  They initially told us our car didn’t have a spare, but John found one and changed the bad tire (found it had a bad valve stem) for the little donut spare.  Then talking again with roadside assistance we made arrangements to change out cars at Enterprise in St George - four hours south of home.
The drive on the spare went well and shortly before we pulled into St George, we called the SG Enterprise office to make the arrangements.  The rep we spoke with told us it would be faster for us to just stop at the tire store and get the tire fixed. So we called them and they told us they had an hour wait.  Hmmmm, not liking that idea.  We really wanted to make it to Oceanside not too late.
So we stopped in at the tire store, hoping they may have cleared out some of their backlog.  Our hopes raised when the guy in line in front of us was told they would get his car in right away to install his new tires.  We stepped up to the counter and waited our turn.  The next clerk asked us what we needed and we told him the story.  “No problem”, he says. “We’ll take care of you”, he says. And then he says, “It’ll be 2 1/2 to 3 hours.”  YIKES!  “No thank you”, we said and headed for the Enterprise lot down the road.
When we pulled in we were greeted nicely and I asked him if he was the guy I talked to on the phone about our car.  He wasn’t, so we told him the story.  He goes, “hmmmmm”. “Well, the problem is we don’t have any extra cars.”
Ugh!!
We look pleadingly at him and John tells him the problem with the tire is something that likely should have been picked up before we rented the car.   Not sure he bought that.
He walked around a bit and then came back and said they had a car that just needed to be cleaned we could move to.  Yaaayyy!!
Soon we loaded our stuff from the really nice Ford Fusion hybrid we first had into a basic bottom of the line Sentra.  Not so nice, not so much room, but four fully functional tires.
Off we went.  No wait!  We couldn’t go.  The car was on empty.
Back we went and let them know.  Glad we did because he had initially marked our contract as full on fuel.  So we got that changed and then headed off to Costco to fill up.
Then we were back on the road.  At this point we were running about 2 hours behind our initial plan, but we did build in lots of extra time so we felt like we were going to be ok.  And we were!  After tons of driving.  A stop in Jean, NV at what is styled as the largest Chevron anywhere, we got White Castle burgers and let the poodle run around in the cute little dog park. Then back on the road.
We made it to my brothers’ house in Oceanside at 5 pm.  Just right!  My sweet sister-in-law was busy making shredded beef enchiladas and they were heavenly.  A few days of hanging out, neighborhood and beach walks, and my spirit is fully renewed.

Today, Monday, is our last day here.  We decided to take the poodle to the dog-friendly beach.  How much fun we had!! 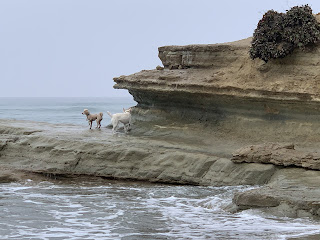 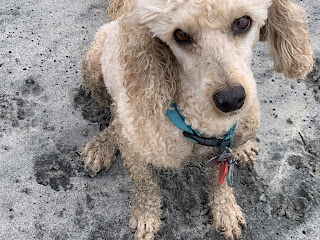 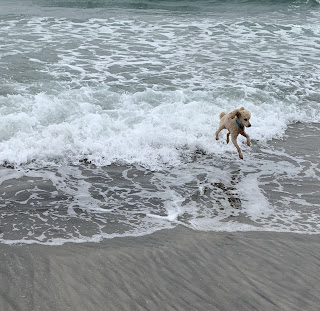 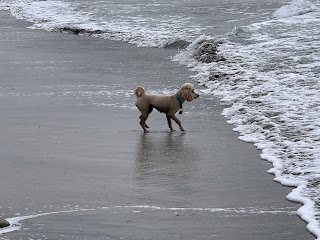 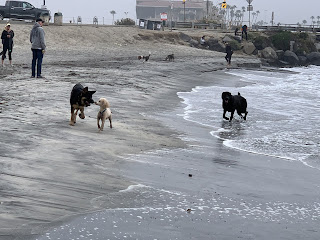 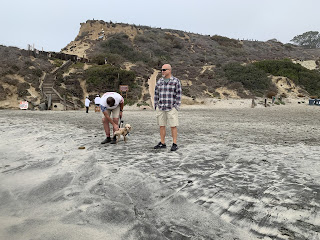 They even had a sweet little dog memorial park where we were able to wash the sand off before getting in the car.  I even talked John and my brother to pose for a festive Christmas pic. 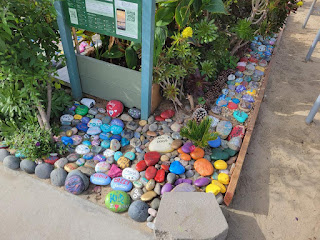 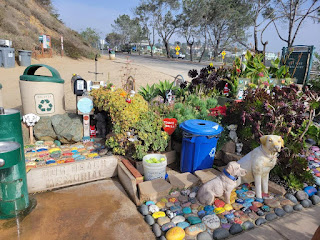 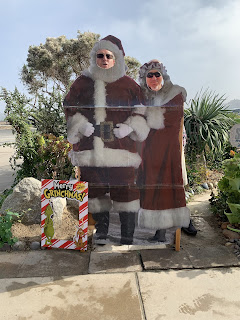 What a blessing to have this time together.  Tomorrow at O’Dark Thirty we hit the road back.  This time we have a much more precise deadline to meet, so we don’t have to pay an extra day at Enterprise.  Fingers crossed!!