Splish Splash - Are we getting wet?

So, as we chatted, we were walking back from the restrooms, and we saw Renee, the yard manager walking across the boatyard. John went to check with him about the schedule, while I went back to the boat. Soon, I saw them walking toward the boat and went out to chat with them. They were talking about the other plans the yard had for moving other boats, both back into the water and coming out for winter storage - it's that time of year you know. They had a particular catamran they wanted to haul out and put on the hard just east of us - really tight quarters given the little creek that is not far east of us. Plus, the catarman to the west of us, Lowlander, had already made arrangements to go into the water just after lunch today. Imagine our surprise when it started sounding like they could get us into the water this morning, would like us to get into the water this morning, and could give us time lifted up in the slings overnight so we could get the paint we need on the bottom of our keels. Then the marina owner came up and joined the conversation, and got really excited about the idea that we could get into the water today - but we knew if we committed to that, we had a huge working day ahead of us - and soon, we had agreed to be ready, and they were bringing the lift over after lunch to pull us up so we could paint. Yaaay!! 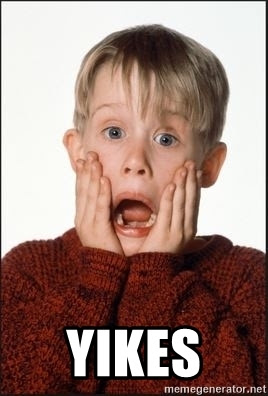 What did we need to do to prep you ask? Well, we basically had a whole workshop built up underneath the boat that had to be moved out of the way. Some of the stuff would have to go on the boat, some in John's truck, and some, just thrown away. 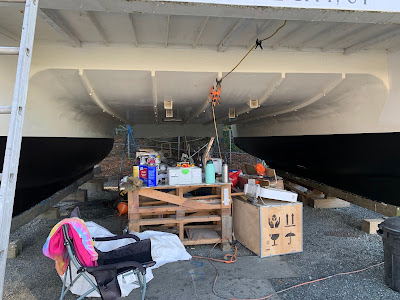 Luckily, I had already gone through and sorted much of it into groups (you can't really see the full scale of what all is there because it is behind the workbench). So, we put on our workclothes, our gloves, and dug in! Several hours later, just before the lift came to hoist us, this is what it all looked like. 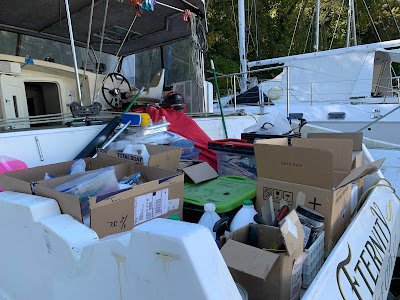 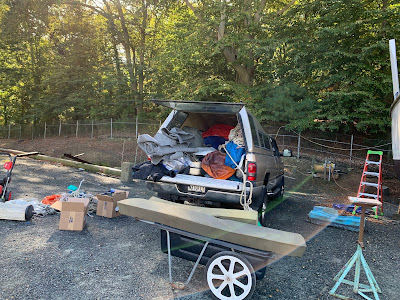 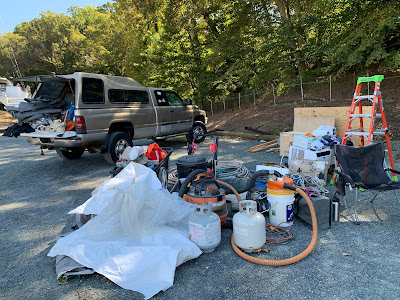 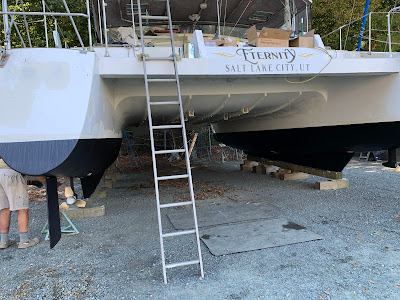 I've seen this process happen a number of times on other boats, but never as up close and personal as this time. Fascinating! Steve and Junior did an amazing job getting it all done quickly and efficiently. This is how a 20,000 lb boat gets ready to float. 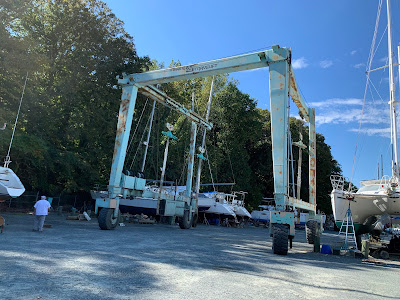 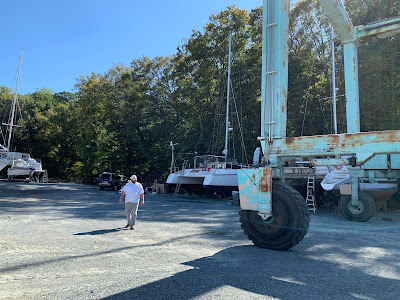 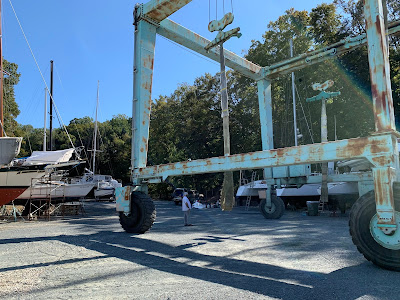 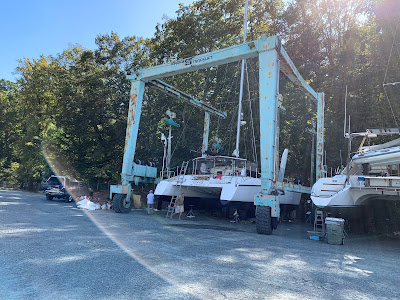 The lift coming our way and getting positioned. That thing is HUGE! Next up, connecting the slings under the boat - I had no idea how this was done before I saw it up close. 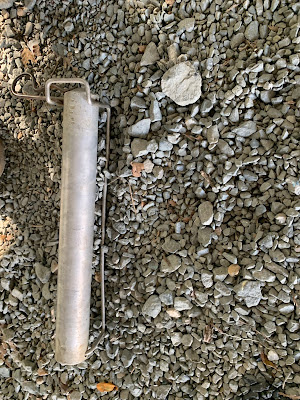 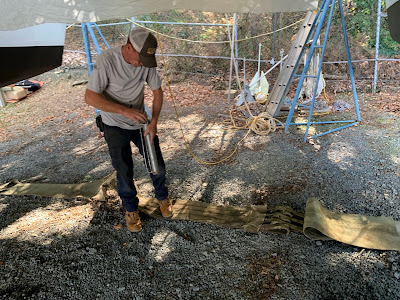 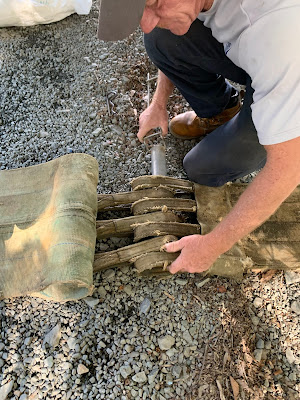 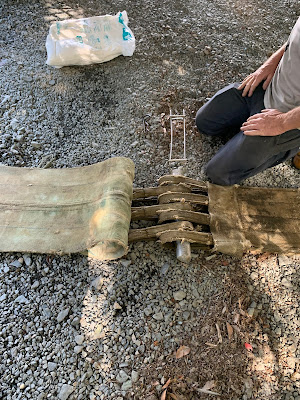 Very clever. Once it is all set, then they start lifting. That is a heart stopping moment! When they first pick it up, the boat will sway in the slings. Think about watching the future home you have invested all of your savings and so many hours in to being picked up and start swinging back and forth. Granted, it didn't really get that close to the lift sides, but boy-oh-boy does it look like it might for a few minutes. Then suddenly, there it is, all lifted, all the supports moved out from under the keel, a few new supports added to take a little weight off the slings, and it's ready to start getting bottom paint on the parts that were sitting on the earlier supports.

This pic will give another view into the scale of that lift. 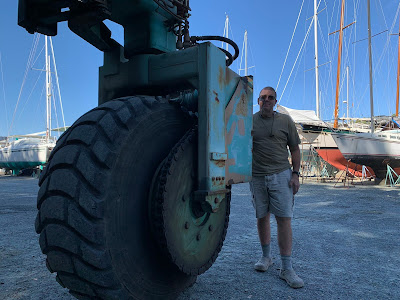 John went to work scraping barnacles and then sanding the bottoms of the keels, while I worked remote for the afternoon. When I was nearly finished working, I got ready and went down, just in time to get ready to help paint. I did one more meeting from my phone down there while John cleaned the areas he had just sanded, then we got ready to mix more epoxy barrier coat. By the time I got started, it was getting on towards dusk. So fairly soon, we had headlamps on, utility lights out, and I scooted along on my little stool, painting while John worked on getting our anchors on board and getting our fenders inflated. In between coats, I started getting things put back in the truck (I had taken a lot out to get to the fenders and lines that we needed). Here's a peak at working in the dark. 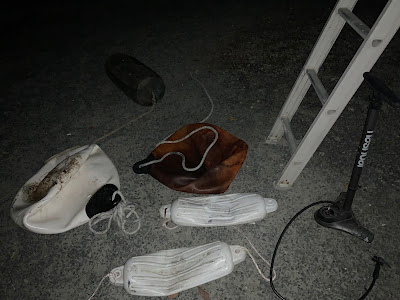 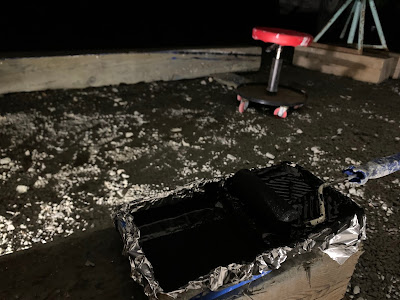 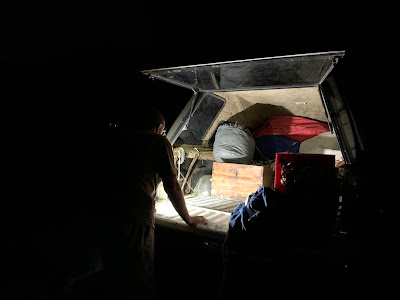 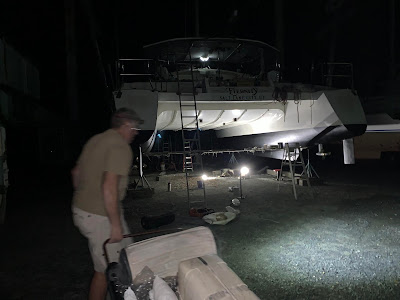 We finally felt we had enough done at midnight (not to mention we were both so tired), and then got ready to go get showered before we grabbed a few hours of sleep. John had to literally drag me up the hill to the showers beccause I was so exhausted. But we had done it! Now to get ready for the big splash day! 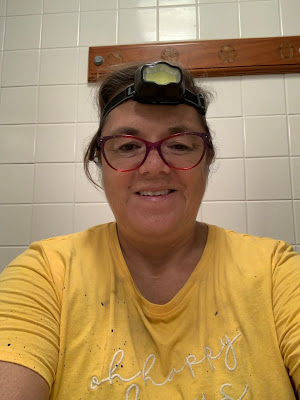 August 19, 2021
Well, here we are. A couple of years ago we decided to buy a bluewater sailboat and sail wherever we want. We had a plan. A five year plan. We still do, it's just changed a bit. Originally we were going to spend five years learning about sailboats and trying them out during various vacations to decide 'the perfect' boat for us. Surprise, surprise! We found an older boat almost right away. It's a long story that most of you have heard us tell. Maybe one day we will post about it. Fast forward to now - August 2021. We've had the boat out on 'the hard' in the boatyard, working on removing 25 years of old bottom paint plus converting her over to 100% electric! We are totally committed to 'splashing' (getting this boat in the water) by October this year so we don't have to pay for another year on the hard. Plus, since the boatyard we are in is likely going to be sold soon, we aren't even sure we would be allowed to stay another y
1 comment
Read more

October 27, 2021
Wow, Wow, Wow! Friday was quite a day for us! Yes, you are seeing that right. WE ARE IN THE WATER!! Before you ask, however, no - that doesn't mean everything is done and we can now just travel anywhere we want. Not by a long shot! We have the electric motor and saildrive mounted - with no leaks! but there is still a lot to do to get them all wired up, controllers, monitors, and charging inverters connected, throttles mounted and connected, etc. That's definitely the priority now. But, first let me share the amazing holy-smokes wait-what experience that was Friday! In my last post I talked about the sudden decision to go into the water the next day and our late late night scramble to get everything ready for that. They told us they would be ready about 9 am to come move us down to the water. So, after a very few hours of not the most restful sleep, we got up at 6 to keep getting things ready. I still had to move all the stuff I lifted up to the back deck and g
Post a Comment
Read more