Prepping for All Electric Propulsion Systems

October 13, 2021
I've mentioned in a few posts that we are transitioning the boat to be 100% electric. That means we have taken out both of the diesel engines and associated hoses, wires, gauges, controls, and fuel tanks. John did that last year and earlier this year. Next he had to figure out from the equipment and all the specs given with it, exactly what needed to be changed in the old engine compartments to accommodate the new electric motors and batteries, along with all the wiring, controls, gauges, etc. Then he had to modify the engine compartments. That meant filling in some holes while cutting others. It meant a lot of fiberglassing and even some carving. He did some woodwork to build the boxes that will hold the new lithium batteries. And then he fiberglassed over that woodwork to ensure it is protected and strengthened.

Working on all these things for the past months has taught us both that boat yoga is a thing - and that nearly every mistake you make can be fixed or redone, so don't be afraid to step in and try something!

I'm going to do my best to describe the pictures I'm posting and talk about the next things that happen. But I know that I won't get all the technical details to the level some will want and will likely get something wrong. So, post questions or comments here, or, email either of us at elaine@sveternity.com or john@sveternity.com. 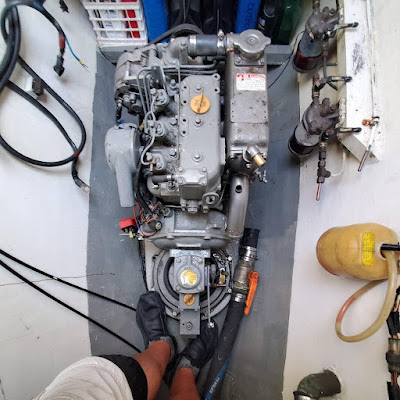 This is the old engine in the engine compartment before any of this work began. 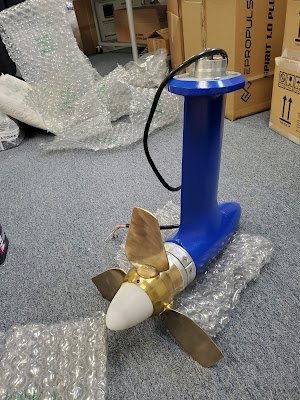 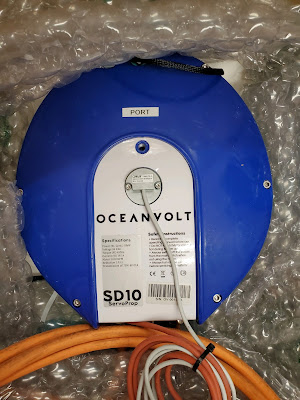 This is simply THE BEST setup an electric boat can have. The sail drives connect to the motor through the bottom of the hull. They are different than 'normal' sail drives because they have smarts built in so that the prop fins move and turn depending on what we want. If we want to motor, they adjust to the best angle to get the most out of the power they receive from the motor. If we want to sail as efficiently as possible, they will adjust so that they cause as little drag as possible. If we want to generate electricity back into our batteries using hydrogen action while we sail, they will adjust to the right angle to generate the most electricity possible. 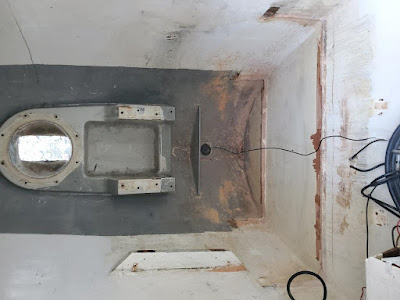 This is the engine compartment with the motors and diesel tanks removed. Nearly all the fiberglass structure forming the motor and tank mounts you see below had to be removed and new motor mount structures fabricated. 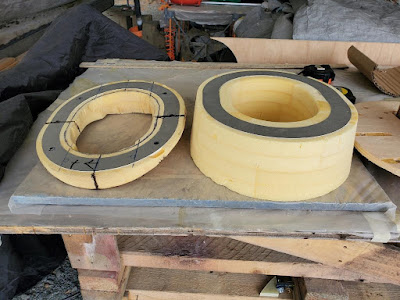 These are the 'davina seals' that are used to help fabricate the new motor mounts. We have exceptionally narrow hulls (that means it is more of a performance catamaran) compared to most production cats, so John had to carve, test, carve, test, carve, test, and on and on until he got a good fit that meets motor and sail drive specifications when it fits in our hull. Then, he had to build up the fiberglass holding this in place and securing it. He put down about 10 layers all told. Then it all had to be sanded, smoothed and formed to really fit. 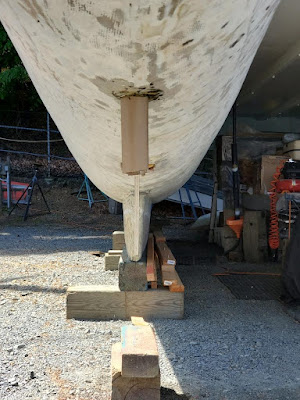 This shows the cardboard models he used to ensure that everything would line up properly. Not much would be worse than when the motors and sail drives are mounted if they are out of alignment with each other and the boat!

So this is all that had been done. Stay tuned for tomorrow when I catch you up in real time to what else has been done. There's BIG BIG news!!!